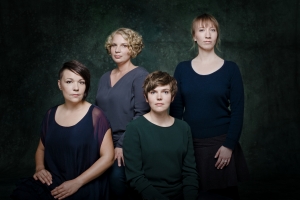 “Four female voices, nothing else – and yet much more.” – Leipziger Volkszeitung

The vocal quartet niniwe from Berlin stands for their own artful arrangements that do not allow themselves to be limited by common genre labels. With a wealth of facets, homogeneity and precision, the four women create a fascinating world of sound that wants to be experienced and is difficult to put into words.

Since the founding of the ensemble in 2002, the studied jazz singers have received international recognition, won numerous prizes and performed in large concert halls as well as at renowned festivals at home and abroad.

Niniwe has released six albums so far, the seventh CD is currently in the making.